Looking ahead to 2015 and beyond, we are confident that we can expand our focus on profitable growth. The momentum is continuing.

Finally, IFRS net income amounted to EUR 8.4 million in 2014, after EUR 11.6 million in 2013. Beyond the favorable development of operating income, net foreign currency exchange gains of EUR 1.1 million 2014, after respective losses of EUR 1.5 million recorded in 2013 contributed to this development. These effects were overcompensated by the decrease in tax benefits, with a reported income tax benefit of EUR 0.2 million in 2014 after an income tax benefit of EUR 7.3 million in 2013. The 2014 tax benefit mainly results from the recognition of deferred tax assets related to tax-loss carry forwards while in 2013 the tax benefit was mainly due to the recognition of deferred tax assets on tax-loss carry forwards and the release of tax provisions related to open tax audit appeals that were partially resolved in 2013. Basic and diluted IFRS net earnings per share were EUR 0.17 each in 2014, after EUR 0.24 each in 2013.

“We are extremely pleased with our 2014 revenues which are at a record high of EUR 339.2 million, up a sound 9.2% compared to 2013. Q4 2014 revenues at EUR 86.7 million are in the upper half of guidance. This marks the fourth consecutive quarter with year-on-year growth. In addition, our pro forma gross margin at 36.6% in Q4 2014 improved from 35.3% in Q3 2014. We achieved a pro forma operating income of 5.9% of revenues in Q4 2014, at the upper end of guidance, demonstrating our focus on managing operational costs. Further, for the second consecutive quarter end, cash and cash equivalents as well as net liquidity were at new quarter-end record highs of EUR 83.9 million and EUR 48.9 million respectively. Throughout the year, ADVA Optical Networking maintained financial strength, with an equity ratio in excess of 50% and high net liquidity levels in all quarters,” commented Ulrich Dopfer, chief financial officer of ADVA Optical Networking.

In conjunction with the release of its full-year 2014 audited IFRS financial results on February 26, 2015, ADVA Optical Networking will host a conference call for analysts and investors at 3:00 p.m. CET / 9:00 a.m. EST. Participating in the call will be ADVA Optical Networking's chief executive officer, Brian Protiva, and chief financial officer, Ulrich Dopfer. Interested parties may dial in at +49 69 201744 210 or +1 877 423 0830, pin code 262 302#, and download the corresponding presentation from ADVA Optical Networking's website, www.advaoptical.com, located in the “About Us / Investor Relations” section on the “Financial Results” page under “Conference Calls”.

In Q1 2015, ADVA Optical Networking expects revenues to range between EUR 90 million and EUR 95 million, and anticipates pro forma operating income of between 0% and 4% of revenues. As a matter of caution, ADVA Optical Networking notes that it will continue to perform quarterly reviews of the expected business development with respect to all intangible assets, including capitalized development expenses. In case of highly adverse business prospects, these reviews may result in non-cash impairment charges in Q1 2015 and beyond. The pro forma operating income guidance provided above excludes any such potential impairment charges. ADVA Optical Networking will publish its Q1 2015 financial results on April 23, 2015.

“2014 marks the strongest year in our history. We not only grew revenues, but also achieved our goal to grow profitably with a pro forma operating income which expanded by 10.5% in 2014 from the prior year. In its overall addressable market, ADVA Optical Networking continued to hold a strong position. For fiber-based Ethernet access devices, the Group ranks second with a market share of 15%.[1] More than ever, it feels like it is all about “networks”. Looking ahead to 2015 and beyond, we are confident that we can expand our focus on profitable growth. The momentum is continuing. We are experiencing a strong pick-up in demand with current levels of order book entries reaching an all-time high in Q4 2014.  While Europe’s spending levels have been far below trends seen in North America and the Emerging markets, we are now seeing signs of the telecommunications industry slowly returning to growth in Europe. Over the past two decades, ADVA Optical Networking has built its reputation with innovative product and service offerings, and our strong R&D investments will continue. New product cycles and launching market-leading technology will be the catalyst for improved shareholder value, supporting our expanded focus and commitment to grow profitably,” stated Brian Protiva, chief executive officer of ADVA Optical Networking. 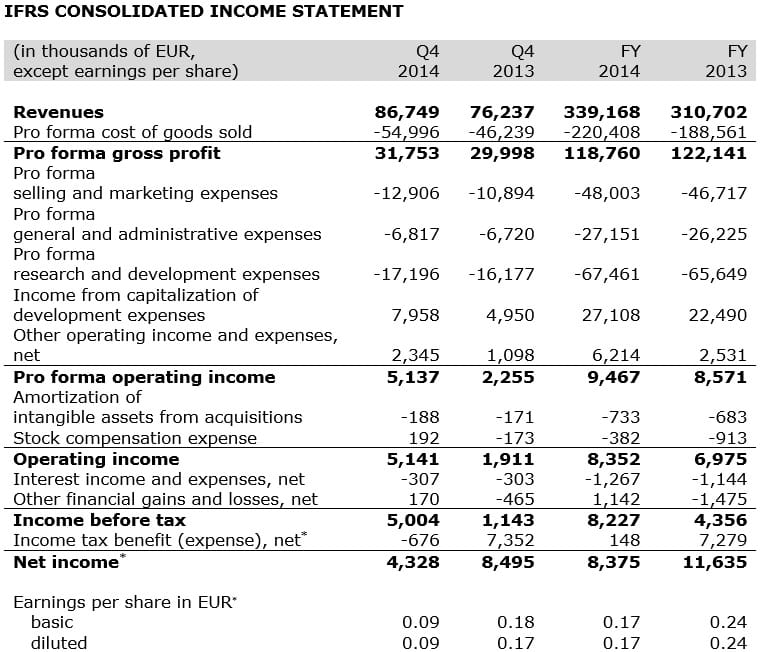